What’s In A Name? New Dating Trends That Are Not All That New 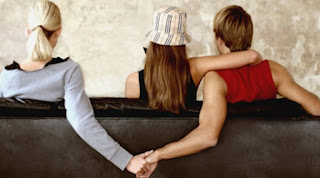 If you take the time to read dating articles in magazines or on the internet, you most likely have run across a few talking about new terminology for dating trends. In the wee hours, when someone had little else to do, a list of very common words were recycled and put to a very uncommon use. At first glance, they appear bizarre and totally unrelated to the act of dating at all. When you look closer, and discover their meaning, you find out these practices are really not new or even trendy. These types of bad behaviors have been around for hundreds of years. As humans, we have not invented anything original; just found a shiny new label for actions that can be traced back simply to that of another name.

Let’s take a look at a few.

Cushioning…This describes a person who is in a relationship, but has ‘cushions’ of other people around they flirt and hang out with. They have this cushion, or safety net, for use to break their fall when the relationship is over. They simply bounce on to the next cushion. Back in the day, this was called having a Little Black Book. Before the age when all our contacts were at our fingertips and a keystroke away, men and women both, kept their friends list in an actual hardbound address book. When a person also used this information to keep track of which ‘friends’ could be called upon during a dating slump, this was known as their Little Black Book. The idea here is basically the same. Regardless of how they are sorted, some people always have a back-up plan and never intend to stay lonely for long.

Breadcrumbing...This person doles out affection and attention, but in measured doses; just enough to keep the other party’s hopes up that a relationship is just around the corner. They are not really interested in commitment, but want to have someone around until some ONE better comes along. We used to call that keeping them on the back burner, or leading someone on. We don’t want them to go away, but we don’t give them top spot. All the good stuff is kept on the front burner, but we keep the back burner for the ‘just in case’.

Benching… This is a sports reference. A person who practices ‘benching’, will communicate through social media or even text, but never makes any real attempt to get together. You are benched while they utilize their star players. This reminds me of the term ‘playing hard to get’. The person doing the benching give just enough attention to keep someone in the game, but stays distant and aloof enough so as not to appear too interested.  At some point, you just need to tell the coach to take you out so you can find somewhere else to play.

Ghosting… Now I admit this one threw me off a little. It is a situation where someone just simply disappears and you never hear from them again. Other than simply being called rude, it usually is more common with online dating sites where a full relationship has not been established. Maybe you are just emailing or have had one date, and then ‘poof’ they are gone without explanation. It is only in the very early stages that someone could completely go off-grid and you not be able to find them. If I were dating a guy and he disappeared, I promise I would show up at their home or their work to find out the reason. That has its own terminology; it’s called stalking.

Haunting… As you can probably guess, haunting is related to ghosting. Apparently when someone has become a ghost and wants to return, they simply haunt you by showing back up and randomly liking something on Facebook or sending a casual text. In addition to being irritating, this is what I call a tease. People who show up when it is convenient for them and disappear when something better comes along, is just playing with your emotions. Do not let yourself get spooked by their shenanigans.

Cuffing Season…Now this one I could not find another a matching term for. In fact, I’ve never heard of this behavior. This is where a person only chooses to date during the winter months. Throughout the summer they enjoy freedom and ease of living, but when the temperature drops and darkness falls early, they seek out companionship for the long nights. You could probably only get away with this once, so this person must bring a new guest every year to Thanksgiving dinner. It’s almost that time, so be careful of their intentions if you meet someone new.

Love Bombing….This is definitely red flag behavior. If you have been love bombed, you have met someone who showers, or bombs, you with affection and moves the relationship along at record speed, declaring undying love and making future plans almost immediately. They sweep you off your feet and push aside all reservations until you are under their spell. Then their manipulative/controlling side springs forth. This is typical creep behavior and has been used for decades by narcissists to lull in their victims before showing their true colors. If something, or someone, appears too good to be true, they most likely are.

I hope you can see that giving it a fancy new name or packaging it in shiny wrappings, does not take away from the damage these behaviors can cause. We all need to recognize and take note of what is going on around us and decide not to participate. If we know our worth, and know what we are looking for in a loving partner, we will not stay with someone very long who exhibits any of these traits. The basic underlying core for these is disrespect and being selfish. A mature, emotionally available and valuable partner will do their best to win our hearts, remain loyal and prove they intend to be around for the long haul. Expect only the best and accept nothing less.