My Date With Murphy (‘s Law) 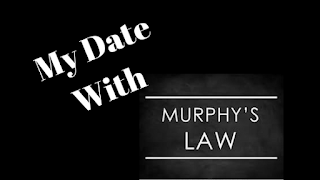 So, I’m not a big believer in ‘signs’. I think things just happen the way they happen. But recently I had a date and the prelude to it was filled with so many missteps and fluke occurrences, it was hard not to feel like Murphy was joining me.

By the way, do you know the origin of the phrase Murphy’s Law, which basically states ‘if anything can go wrong, it will’? It started in 1949 at Edwards Air Force Base and named after Captain Edward Murphy who was an engineer working on a project dealing with the body’s response to sudden deceleration. After finding faulty wiring by his technician, he made the statement, “If there is any way to do it wrong, he will find it.” This immediately became known as Murphy’s Law and was even documented in the project paperwork. When the Air Force gave the final report on the project it was said that the good safety record of the project was due to the belief in Murphy’s Law and the necessity to work around it. The key to working around it is being prepared, and that is where my problem started.

So, I have known “Chad” for a couple of years now. We met in one of my social circles. Our paths did not cross often, but a few weeks ago we re-connected, and he asked if I liked a certain venue and if I would be interested in going there to see a band. Well, of course, I accepted.

The event was on a work-day evening, so I ran home at five to change clothes. Despite my best efforts, I was running a little behind schedule and left in a bit of a rush. About ten minutes from my house I realize that I had lost the fingernail from my index finger. Now they are artificial nails (so there was no blood involved), however, it was quite noticeable and there was no way to fix it at that point.

About twenty minutes from my house I realized I had no cash. I had switched to a much cuter purse (It’s a girl thing, and my cash was left behind.) Now there are two options for parking downtown. There are free parking garages and there are lots that charge $5 - $10. I tend to avoid the parking garages because I have not always had good experiences there. I have legit lost my car three different times in garages and roaming around a parking garage at night is not an activity I would recommend. I would rather pay the money and know where my car is. Except for that night, I didn’t have any cash, was running late and not sure what to do.

Fortunately, I ran across a parking lot with a sign out front that offered payment by debit card. So, I whipped in there and told the attendant I wanted that option. He said I needed to pay at the road. I parked my car and walked back to the sidewalk looking for a kiosk or some other means by which to make this transaction. I saw nothing. I looked high and low and I imagine looked quite silly to those driving by. I eventually admitted defeat and walked back to the attendant. I asked his assistance and assured him I was normally a fairly smart person but could not find it. He walked me back to the sign and said there’s the number, you must call it in. Oh!!! Well, I didn’t know that. (What can I say? I'm still a country girl trying to make it in the city.) Then he added that they would require my license plate number. I thanked him for his assistance, dial the automated number and made my way back to my car because I do not have my license plate number committed to memory. Just as I got to my car, the message asked for the lot number that I was calling from. And, you guessed it, that was on the sign, back at the front of the lot. So, I quickly make my way BACK to the sign to key in the lot number before they hung up on me. I then go BACK to my car to finish the transaction. Whew! I’m safely parked.

Now it is hot and humid where I live, so by now I am feeling a little wilted. I have run around this parking lot and I’m pretty sure my hair and makeup are starting to melt. I take comfort in the fact that I will soon be in the air-conditioned restaurant. I have a bit of a walk, but I make my way to the front door and notice a sign that says…CLOSED. What?? Closed? Not to be deterred or denied, I walk in anyway. There was a woman inside that promptly advised me that they indeed are closed. I ask.. Closed as in not opened yet?? No… Closed until the state allows them to reopen? Again… what?? The ONE place he wanted to go was now closed until further notice.

I now have no choice but to wait for him back outside. He had sent a text while I was wrestling the parking that he was running just a tad late also. I decide to sit down on a bench out by the sidewalk. I did this forgetting the rain shower that had come through about thirty minutes earlier. So, yes, you are right. I now have a wet derriere. It is at this point where I consider throwing in the towel and going home. There is no way anything good could come out of this. I looked a literal hot mess and my nerves were frayed. It was at this moment he walked up.

All I will say about the rest of the date is that Murphy took pity on me and left. Surprisingly I had quite the lovely evening after that. Chad took the news of the place being closed in stride, came up immediately with an alternate plan and off we went. The troubles leading up to that point were history and I had a great time.

I shared all of that with you for two reasons. First, to let you guys know that sometimes freaky, irritating and maddening things happen to all of us. Second, to remind you that even when those maddening things happen, it doesn’t have to define the rest of your story. Murphy will sneak up on you when you least expect him and try to shake your nerves and rob you of joy. Don’t give him the satisfaction. Keep on trucking. Whatever curve balls are thrown at you, dodge them, hit them, throw them back; whatever it takes to get back into the game. If you press on, you will reap the reward of not giving up and you will discover that things are not nearly ever as bad as they seem.

Hang in there my Hopefuls! Get out there every day and live it to the fullest!!