Why This Memorial Day Should Be About More Than BBQ 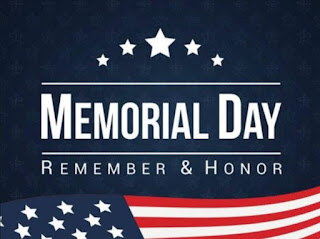 Don't get me wrong. I love a good BBQ. In fact, being from Eastern NC where we are famous for our vinegar sauce, and having a father who raised hogs, I've eaten my fair share. And who doesn't like a nice day on the lake? Plus, don't get me started on three day weekends!

But this year, I'd like for us all to step back and take a moment to reflect on the true meaning behind Memorial Day, and how it impacts our lives today.

Did you know the origins of Memorial Day came after the Civil War, which saw more lives lost than in any other time in our history? There were so many dead soldiers, it created the need for the first national cemeteries.

There were several cities that picked days to honor their local fallen, but there was not a nationwide remembrance until General John A Logan, who was the commander-in-chief for a Union veteran's group, declared that May 30th would be a national date of commemoration.

It was originally called Decoration Day, and General Logan encouraged all Americans to place flowers around and decorate the graves of the dead soldiers, who he said: "now lie in almost every city, village and hamlet churchyard in the land".

Some believe he picked that date because it didn't coincide with any Civil War battle, but others say the day was chosen because, by the end of spring, all of the flowers would be in bloom.

After WWI, Memorial Day was changed to include honoring all soldiers who died in war. It was officially changed to the last Monday in May in 1971, and now is now a federal holiday, and also the unofficial start to summer.

Herein lies my problem with the holiday this year.

Am I the only one who feels we are in another version of a Civil War? There aren't armies marching and rampant bloodshed in the streets. We aren't sending our husbands, sons, and brothers marching off to fight in the battlefields, but there is a tremendous amount of hostility, rage, and conflict at every turn.

I can promise you, I'm not a political person. I pretty much disdain all it stands for, but I did once respect the process. And I'm not going to take sides or promote one party over another. I'm just here to say, we've lost our way.

I can't really put my finger on when the tide started turning. I honestly believe it was a slow progression; like a cancer that sneaks up on you until it's too late. I'm afraid, as a nation, we have a malignant disease overtaking us.

I guess that sounds depressing, and I could be ruining your picnic. My apologies. But I am genuinely worried about the path our nation is on. A nation that we fought tooth and nail to establish. A nation that was built on integrity and patriotism. Were our forefathers perfect? Of course not. Does that give us the right to tarnish every good thing they ever did? I don't think so.

Look, I don't have any answers, not really. None that anyone would take seriously anyway. All I know is that I've invested the last few years to spreading hope, encouragement and trying to motivate you guys to live your best lives now. And for one day, this Memorial Day, I'm going to ask you to do one more thing. Remember.

Remember the men and women who stood their ground and fought on to protect and serve and died in the process. Remember the sacrifices and acts of courage that came from within ordinary people who were called to do extraordinary things. Remember the families who had to carry on without a father, son, brother, husband, sister, daughter, wife or mother.

Remember that people gave their lives so we have the privilege to say and live how we believe, even when others don't agree. That's a huge freedom that so many other places do not experience.

So can we, on this Memorial Day, put aside our political differences, our fiery worded darts, our demeaning jabs, our ploys, and our tactics and can we all just be Americans? Honoring our country and those who died to give it to us?

Can we show our appreciation for their sacrifice by offering a small piece of our attention, gratitude, and devotion?

Go to a parade. Wave a flag. Lay some flowers on a grave. Say a prayer. Find a veteran and thank them. Take a moment from your busy day of posting pictures of hot dogs, lemonade and beach towels and pause to reflect on those who paved the way for our freedoms.

Regardless of our political beliefs, party or views, we are all in this together.

For one day, let's remember that.

Then go eat your BBQ!

And Hope With Abandon!