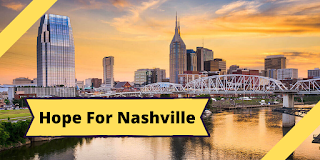 In the early morning hours of Tuesday, March 3rd, a series of devastating tornadoes raced through four counties in Tennessee leaving death, chaos, and shredded homes in their wake.

Nashville, the Music City, was it the path of one of those tornadoes and while the winds may have been intent on tearing the city apart, it turns out the opposite of that is true.

I love Nashville. I have visited there with the last time being just a few weeks back. Loving country music and being from the south probably influences my opinion, but there is a vibe throughout the city that speaks to community, potential, dreams, and pride. (Of course, let's not forget the endless musical talent and love of the party!)

As I watched the news with a crushing feeling of sadness, I also started to notice glimpses of HOPE. And since HOPE is literally my middle name and the basis for my life's platform, I thought it only fitting to share what I see is Hope For Nashville. (And the rest of us if we pay attention.)

The first sign of HOPE was the standing mural of I Believe In Nashville. 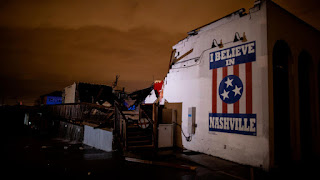 This mural was on the side of a music venue called Basement East. In addition to the concerts held there, it had become a popular tourist attraction for the mural itself. In an unbelievable and almost prophetic turn of events, while the building around it crumbled, the mural itself remained standing with her message echoing loud and clear.

The manager of the venue made this statement to a local news outlet.

"The buildings can be rebuilt, but the people are what make it. The musicians, the artists, the folks who live here every day, and make this dream literally happen," Simpson said. "There's no other place in the world that thrives on music and is able to grow as a city. And, that's what this place is all about. That's what that sign is all about."

This is a common sentiment throughout the neighborhoods and businesses in the city. That strong sense of coming together, helping both friends and strangers. Asking for nothing in return. Volunteers lining up before dawn to handle the task of clean up, debris clearing, hugs, and prayers.

While the world seems to be falling all over itself to tear others down, Nashville is showing us what it looks like to build each other back up.

I hope we are paying attention.

One of my friends, Rachel Lipsky, is a country music singer and songwriter in Nashville. I met her through social media and wrote an article about her rising career. I sent her a text to check on her. Thankfully she and her family are ok. When I told her I wanted to write this piece, I asked for her input. Here are her words.

"I've lived in Nashville for two really big natural disasters. I had just moved here ten years ago when two days later the major flooding occurred and now this. It never ceases to amaze me how we all come together to help one another. As a community, we drop everything and help those in need, donate time and resources." She went on to say, "Clean up crews are in awe at how much is being done before they even get there. This is a true testament to incredible human beings. We're all here for one another - this is what life is about, this is our purpose - to help one another."

I have another recent acquaintance through social media. Chuck Pursel is the tour manager for 3 Doors Down and has lived in Nashville for most of his life. I started seeing his involvement and help through his posts on social media and reached out to him as well.

He was actually out and about during the storms that night, but he also was thankfully ok. Always being community-minded and ready to lend a hand, he immediately reached out to Costco who he has worked with in the past. They stepped up to offer water and other supplies and has kept him busy in the pipeline of helping.

When I asked him what made Nashville so special he offered this insight. While some areas with competing artists are out to one-up or better their competition, those coming to Nashville to pursue their dreams are willing and ready to help others with the same passions.

He said there has been an outpouring of support from every corner of the city. From free pet sitting services to restaurants serving free food, those in need are finding help and comfort all around.

I asked him to share one uplifting story and he told of delivering water and driving through one neighborhood after another seeing people having cookouts. Now, these weren't your average cookouts. No, these were people with freezers with no power who decided instead of having their food be wasted to instead cook it for everyone to enjoy. And this scene was repeated over and over.

When questioned about how those of us outside the area could help, his response was simply financial assistance. There will be so many who need so much.

His recommendation was to purchase an I Believe In Nashville t-shirt. 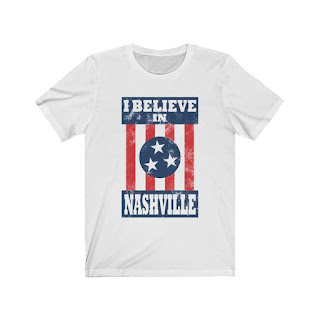 These are being printed based on the image from the standing mural and 100% of the proceeds are going to help the needs in Nashville. So far the amount raised is over $400,000 with a goal of one million.

I intend to buy one and I hope all of you out there will as well.

Here is the link.

My Hopefuls, I know there are people who need our love and support in every corner of the world. And I believe we should do our best to help whether it is one random act of kindness in your city or reaching a need near to your heart a thousand miles away.

I chose to highlight Nashville not only because it is a city I love, but because their selfless attitude, sacrifice, and resilience is what is needed across our great country right now.

I believe in Nashville, but I also believe in us as a nation. And I am ready to see us come together, support one another and just simply love one another.

And I believe in YOU! You guys are my inspiration and encouragement and the reason I keep trying to push my agenda of HOPE. Hope is not some random concept out in the universe, it is already in each one of us.

I see it in Nashville and I see it in you and it gives me the courage to.....