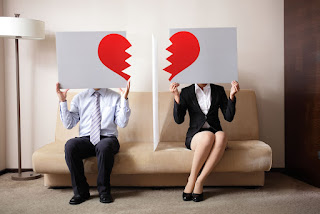 Being dumped absolutely ranks up there as one of life's most distressing moments.

Emotions run high and thoughts and energies go into overdrive. When we are young and heartbroken we often say and do things that are impulsive, harmful, and eventually regret.

I have been ghosted, dumped the day before Valentine's Day, and surprised my boyfriend while he was making his famous homemade chocolate pie. (Which was not for me, but was his go-to second date way-to-impress ploy.) I've been played and betrayed. So trust me when I say I understand the associated feelings.

Maybe you are the one ending the relationship. That can be difficult too. People stay in dead end situations from fear of starting over, due to pressure from others to stick it out, or just not wanting to hurt someone. Even when something bad happens, and you know it's time to go, taking that first step is tricky.

And being older doesn't make a break-up any easier. Age doesn't shield us from the trauma of it all.

The reality is, there is no age limit on when a relationship can end. We are not exempt from the pain of a breakup just because we've had more birthdays behind us. Emotions don't typically dampen with age.

But age should bring a measure of maturity. Should. But, yeah, not always.

And after a certain age (let's say 29.5) your responses should reflect that and your decisions made from a place of doing what is best for you to move on with grace and empowerment.

So, I've put together a few things that I think will help all of us navigate a breakup like a grown-up.

You are never doing yourself or your partner any favors by prolonging the inevitable.

When it's time to have the hard conversation, suck it up and have it. You don't have to be mean and degrading, just speak your truth.

Don't just hide or walk away. Don't try to make them so miserable that they leave. Don't do it by text. Have a mature conversation where you say it's time for you to move on.

Depending on the type of relationship, there may be other things that must be said or decided, but always focus on the truth and conduct yourself the way you would like to be treated.

2. Allow Time For Emotions To Settle

Whether the decision was yours, or was made for you, allow some time for the emotions to settle.

There will likely be tears. Maybe anger. Accusations. Allow the other person to vent and express their feelings. You don't have to stick around to be abused, but let them feel like they had their say.

Then let some time pass. If there are issues that still need to be resolved, allowing some space for the initial emotional response to cool down will help keep both parties more level-headed.

You can't control the reactions or behaviors of another, but you can choose to handle things the right way. Be fair. Be respectful.

On a side note - leave them alone. No late night pity calls. No begging to come back texts. No showing up at their home or work 'just to talk'. When it's done; it's done. No looking (or going) back.

If they have made the decision to move on - accept it.

If you made the decision to move on - move!

The most natural human response when someone hurts us is to hurt them back. An eye for an eye. Don't waste your time.

Resist the urge to share intimate details/photos, etc. (If I might make a suggestion - never give anyone ammunition that could be used against you one day ie: photos and/or explicit text.)

The truth is, it rarely works as intended. And YOU end up looking foolish and pathetic.

On the rare occasion you succeed, I promise it will not feel as good as you hoped. It is hollow and stale. I didn't coin the phrase, but it is true nonetheless:

The best revenge is to move on and be happy.

I could write pages on the damage that social media does to relationships. One of the worse ways this plays out is when a relationship goes sour.

The first thing NEVER to do is play out your relationship drama on Facebook. No matter how much you want the world to know you were wronged, PLEASE refrain yourself. It is not a good look on you.

Those who know you - know the truth. Those who don't know you shouldn't be on your Facebook feed. (Yes, I went there.)

Second - limit the tear-jerking, heartbreaking posts and memes. Don't put yourself in the position of a victim. I have no issue with the occasional quote or post that sums up your feelings at the moment, but post after post after post of how rotten life and love is will eventually make you look bitter.

And last - for goodness sakes - don't stalk them online. And you might ask, J. Hope, haven't YOU ever stalked someone on Facebook or Instagram? Why, yes. I have. And more importantly, I regretted it.

There is no redeeming value to putting yourself through the pain. It doesn't help the healing process no matter what you tell yourself. And NEVER share, like, or comment on any of their posts. You are better than that.

5. Accept Your Role In The Relationship

Except in the case of abuse or extreme circumstances, most relationships do not fail behind one person.

No one is perfect and everyone brings in their own brand of trauma, baggage, and idiosyncrasies. This is especially true for those of us starting relationships in our mifelife/older years.

The demise of a relationship rarely hinges on one single event. It is the culmination of mistrust, incompatibilities, emotional distance, jealousy, lack of honesty, family issues, and the list goes on and on.

When the dust has settled, take a long and truthful look at the part you played. I'm not asking you to beat yourself up. It doesn't even mean you did anything 'wrong'. Sometimes it just doesn't work and sometimes it just wasn't the right time or for the right reason.

Your best chance of a successful relationship in the future is owning your role in the ones from your past. Discover. Grow. Reach. Review. Improve. Prepare.

The lessons you need to learn from the entire experience will not sink in if you don't take the time to reflect. If your mission becomes to fall into the arms (or other things) of someone else with a stopwatch ticking, you will never fully heal and move on better for the next time.

A rebound hurts everyone. You. The other person. Probably your ex who will most likely find out about it. It's not a bandaid. It's not a quick fix. It doesn't work to forget anything or anyone.

There is no hard rule for when you are ready to date again. But if you are still hung up on your ex, still texting them, stalking them, talking about them or basically doing any of the things above that I've warned against - you are NOT ready.

It is only after you have a clear conscience, mind and heart that you should entertain the thought of opening up to someone else.

My Hopefuls please don't think I'm sitting on my high horse criticizing and reprimanding you.

Trust me I HAVE BEEN THERE. And I have made so many of those wrong decisions. I have not always acted like a grown-up after a break-up.

But I believe WE can do better.

And I want to help and encourage you to think ahead. Be proactive.

Don't make knee-jerk decisions while riding an emotional roller coaster. Let the ride end. Level your head. Then maintain and conduct based on the person you know you want to be.

You will survive. You will heal. You will move forward.