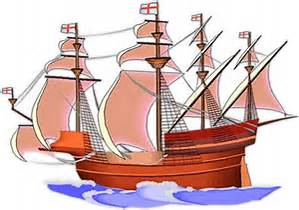 This was meant for Columbus Day, but I missed the mark just a bit. (Yes, the pun was intended.)

Hopefully it will still resonate with the Explorers of Life out there.

I love the following quote. It inspires me because it speaks of bravery, adventure and even my favorite….Hope!

If the highest aim of the captain were to preserve his ship, he would keep it forever in the port.

Becoming the Captain of a ship is a high honor. The title is not bestowed lightly or achieved with ease; but earned through a demanding and rigorous process. There is also great responsibility as he (or she) is tasked with all aspects of operation; the seaworthiness of the craft, navigation, the crew. This ship is the visible evidence of all their hard work and a source of great pride. The very last thing a Captain would want is to see any harm befall the treasure he has been charged with. But this magnificent vessel with swabbed decks and polished brass cannot just float grandly in the safety of the harbor. A ship is designed for open waters. It was meant to conquer the waves and the wind. The only way for the Captain to fulfill his destiny is to steer out into the waiting expanse. For as surely as the Captain loves his vessel, he must also love the sea.

Now, for me personally, I understand all too well the urge to play it safe. Hunker down. Drop anchor. Ride out the storm. Let someone else chart the course. But that’s the problem. Because then it becomes ‘their’ course. We all have to pilot our own voyage. Whether or not we believe we are up for the task of Captain, we have all been given the responsibility of our own Life Vessel. There is no one more uniquely qualified than you.  A First Mate by your side can be a welcomed addition, but always cherish and take seriously the job of finding your own way.

Of course there will be times when you do feel lost. The water goes on for miles. The horizon seems endless. Please know now is not the time to abandon the ship.  There are plenty of ‘navigational’ tools to utilize. Lessons learned from others. Books. (My personal favorite is the Bible.)  A trusted friend. Sometimes even a professional opinion is needed. A good Skipper understands he does not have to do everything alone and will use the resources at his disposal to make sure he does not run aground.

Also, I am not discounting the storms. They will come. You will need to batten down the hatches at times and cling to the mast. Just remember the winds are only for a short time. Do not despair. And even though you probably cannot see them, there are other craft out there with you. Their boats are rocking and lurching as well. Instead of giving in to your grief and fear, try to give aid to someone else. Most of you know, or have heard the name of Captain Edward Smith. He was the Captain of the Titanic. (That was not his finest hour for sure.) But how many of you know the name of Captain Arthur Rostron? He was the Captain of the RMS Carpathia. That ship was also nearby in the same waters when the Titanic hit the iceberg. When Captain Rostron heard about the disaster, he steered his vessel towards the sinking ship and was responsible for the rescue of many survivors. He could have decided that his vessel was too precious to head towards peril, but he didn’t. He faced the peril and as a result lives were saved.

We may not actually have too many chances to save someone from an iceberg, but I bet you can find those that do feel like they are drowning. Your kind word, encouraging text, dinner out, or prayer on their behalf may in fact be the lifeline they need. Never get so immersed in your own struggles that you cannot reach out to be a beacon for someone. The residual splash back can put your vessel back on the right course as well.

Now we must also be careful to not relinquish the care or steering of our vessel to anyone else. Truth be told, in your lifetime you will run across a multiple of people who will try and take the helm of your boat. Pull out the plank and want you to take a stroll. (Usually that means they have shipwrecked their own and want to have a shot at yours.) Pirates do not always look like Blackbeard. Or Somalis. They can look quite familiar and take the form of family and friends or even a partner. Some well intentioned; some not so much. Advice can be helpful at times. And a faithful crew is certainly very valuable. We were not meant to sail alone. But YOU are the CAPTAIN. Never forget and never let go.

Sailing is not a perfect science however as we circle back around to Columbus. Even with all his skills and education, Christopher still did not end up where he thought he was going.
(Hmmm. Now doesn’t that sound familiar.) Occasionally however these ‘mistakes’ can turn out to be the best thing that could happen. Life’s waters can push us away from where we thought we wanted to land and move us on to a better shore. We can the update our navigational charts and add a new destination to our map. Discovering a brand new world can make us feel pretty darn special and victorious.

And the one really grand thing about a ship…if in fact you do drop anchor at an unfriendly port, the sea is still out there waiting for you to try again. The sun on the horizon is calling your name. Treasure your Life Vessel, but never hide it in a cove.

Sail Towards Your Destiny