Forgiveness Is A Verb (Break The Shackles) 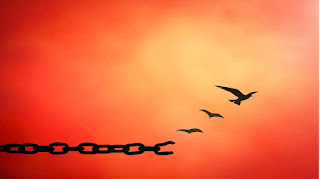 When I Googled the word ‘forgiveness’; (4) of the first (6) results were religious and Biblical in nature. While this was interesting and even comforting to me, it also made me wonder if the act of forgiveness took a measure of strength required from a higher power and that people, by nature, were not pre-disposed to forgive willingly. I suppose that is the origin of the phrase; “To err is human; to forgive divine.” Why is that? Why is forgiving someone such a monumental task? We all want to be forgiven for our mistakes, so what drives us to be so stingy when it is asked of us?

Part of the answer to that question lies in the harshness of the standard we impose on others, while cutting ourselves a continuous break. Take, as a simple example, a common exchange in any household down your street. John is tasked with taking out the trash and Beth is tasked with picking up the milk. Both forget and fail to complete their tasks. Beth’s internal (and most likely external as well) dialogue goes something like, “You never listen. You don’t care. I’m not important.” She assigns an internal defect for John’s mistake; which makes it personal, bordering on intentional, and harder to forgive. When John then goes in later for the milk and finds it not there, Beth’s answer is, “You have no idea what kind of day I had. The kids…the job…the traffic….etc.” For herself, she assigns an external (and therefore uncontrollable) force for her mistake, which should be totally understandable and easy to forgive.

Now this example is not meant to stereotype domestic roles or to say that women find it harder to forgive; please do not make those inferences. The scenarios can go in both directions and the tasks are insignificant. The message, however, is the difference in how we view our failings when compared to those of others. It is also worth noting, that the types of forgiveness that trip us up in life go way beyond milk. My point here being, there is a psychological basis for our resistance to forgive. And we must learn to overcome it.

When a “legal transgression” has been committed, there is system in place to provide justice and restitution. It is not without flaws, but it does exist. However, when the damage is to the heart and the soul, there is no sliding scale for emotional restitution. The first steps to restoration have to come from within the person who has suffered the loss.

How do we start that process? How do we pick ourselves up from the rubble of disbelief and begin the healing? The first step is to FORGIVE, and it can be an extremely difficult thing to do because I’m not talking about repeating a simple phrase. I’m talking about a conscious choice, a willful act, a decision based in reason, and not emotion; to release the other person from the prison in your mind. Yes, YOUR mind. Because that is where they are. As long as you hold resentment, bitterness and hurt for the wrongs you have suffered, that person has taken up residence in your mind. You can never escape them. They haunt you constantly. Making the decision to forgive them unlocks their hold on you and sets you both free.

You don’t want them to be free, you say. You do not want them to walk around released from the weight of their guilt. Unfortunately, that part is out of your control. You can neither make someone feel guilt nor regret. There will be people who hurt you that will show true remorse and work to win back your trust. There will be others who either are unconcerned about the injury, or oblivious to the harm they have caused. Forgiving someone does not let them off the hook, nor does it mean you have suddenly developed warm and inviting feelings towards them. It is the choice that YOU make to break the yoke that ties the two of you together. Many others have said it, and it is true, the act of forgiveness is focused on your healing. We each carry our own burdens of shame and failings. Wishing for the one who wronged you to suffer may seem natural, but in the scope of the kind of future you want to have, it serves no purpose. They fight wars and enemies of their own that we will never know.

Many people today live in emotional misery, continuing to blame another for their internal condition. Blaming others only gives them power over our lives. We hand over the responsibility of our happiness to the very people who have mishandled it. People will hurt us in varying degrees our entire life. Most are not intentional, but the level of hurt it causes is 100% a combination of our reaction to the event and our internal triggers and chosen behaviors. We cannot allow anyone else to dictate the joy, or lack thereof, in our life. We must take back the controls of our life’s ship and sail back into the open waters of peace.

My dear Hopefuls, it is my sincere wish that no one reading today is fighting this battle; however I know that most of us have faced it and may again. I do not want anyone to live one more day in fear or bondage by the actions of another. You are strong enough to handle the setback. You are wise enough to make the right choice. Choose to take back your life. Choose to mentally kick out the enemy. Release them. Forgive them; actively. Get back in the game.